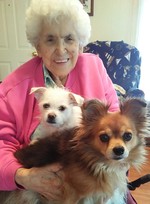 Jean was born in Port Angeles, Washington to Geraldine Dupuis and Reginald DePoe on October 1, 1929. She was a member of the Salish Kootenai Tribes. She graduated from Polson High School and attended one year of schooling at the University of Kansas.

Jean married Norris L. Schwarz in Polson and together they had 3 children, Sherry, Bill, and Michael. Norris later passed away from throat cancer. She then met Charles Griffith, and after 43 years together, Charlie and Jean were married on November 28, 2011. Charlie preceded her in death.

A memorial service is planned for Thursday, Feb. 27 at 2:00 at Good Shepherd Lutheran Church in Polson.