To share your memory on the wall of Abraham Caye, sign in using one of the following options:

Provide comfort for the family of Abraham Caye with a meaningful gesture of sympathy.

Print
Abraham Kerry Caye Jr. was born on June 7, 1954 to Agnes Mae Couture Caye and Abraham Caye Sr. in St. Ignatius, Montana and was called home by the Creator on July 20, 2019 in Seattle, Washington at the age of 65.

In his younger years, A... Read More
Abraham Kerry Caye Jr. was born on June 7, 1954 to Agnes Mae Couture Caye and Abraham Caye Sr. in St. Ignatius, Montana and was called home by the Creator on July 20, 2019 in Seattle, Washington at the age of 65.

In his younger years, Abraham grew up in Elmo along with his 6 siblings for a short time before the family moved to Polson where they remained and made their home.

He attended school in Polson where he was a great athlete and loved to run. He later attended Salish Kootenai College and completed his GED and trade school program for carpentry.

Abraham had many jobs over the years including working in the woods as a sawyer, carpentry, and commercial fishing boats in Alaska.

He moved to the Seattle area about 22 years ago where he resided for the remainder of his days, enjoying life, free, to the fullest, and true to his nature, always on his own terms.

He had a kind and generous heart and went out of his way to help others whenever it was within his ability to do so. He was an avid advocate against littering and would pick up any garbage strewn about where ever he happened to be.

With his gentle heart and contagious smile, Abraham made friends easily on his adventures and had many friends from all backgrounds, and geographic locations.

Abraham is preceded in death by his parents, Agnes and Abraham Caye Sr., brothers, Arnie and Alvin Caye, and sisters, June and Barbara Caye.

He is survived by his sisters, Iris and Delores Caye, daughter Holly Hitchcock, grandsons Justice and Keyan Lefthand, granddaughter Brooklynn Matt, and great granddaughter Antoinette Stevens, and a great grandson on the way, many nieces, nephews, cousins and friends.

We encourage you to share your most beloved memories of Abraham here, so that the family and other loved ones can always see it. You can upload cherished photographs, or share your favorite stories, and can even comment on those shared by others. 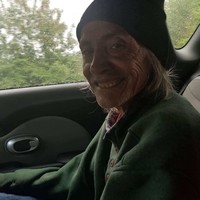