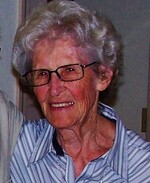 Her family is sad to announce the passing of Annie Catherine Cote Edwards on December 8, 2020, after suffering a stroke. Annie was 94 years old and she resided at the St. Joseph Assisted Living facility in Polson, Montana, with her loving husband. She is survived by her husband of 74 years Robert; her daughter Ruth; her sons Steven and Richard; granddaughters Tiffany, Denisha, and Chantel; grandsons Jason, Joshua, and Nathan; great-grandson Andres; and numerous nieces and nephews.

Annie was born November 21, 1926, to Joe and Mary Cote in St. Ignatius, Montana. She spent her childhood living on a farm and attending school on the Flathead Indian Reservation. Through her mother’s lineage (Kiernan/Couture) Annie was a proud member of the Confederated Salish & Kootenai Tribes (CSK). She was preceded in death by her oldest son Robert, who was a Vietnam Veteran; her brothers Joe, Roger, and Jackie; her sisters Josephine and Beulah; and her parents.

After she graduated from high school, Annie left home to live and work in Arlee, Montana; and later she moved to Kalispell, where she went to work in Sykes Grocery at the cheese counter. She used to tell us kids that each store employee was also assigned a section of grocery shelves to stock in addition to their primary duties. There she met her future husband Robert who also worked at Sykes as a butcher. (Annie’s sister-in-law Ann Sykes [nee Edwards] owned Sykes Grocery for a short period after the death of her husband Cecil Sykes). Annie and Robert were married at the First Presbyterian Church in Kalispell on September 25, 1946.

Annie and Robert lived the early years of their marriage in Kalispell where they attended the First Presbyterian Church. They moved to Wickenburg, Arizona, in the late 1950’s in order to be in a warmer climate more conducive for their son Richard’s asthma. Later they moved to Englewood, Colorado, so that Richard could be treated at National Jewish Hospital in Denver. To help support her family Annie went to work at Swedish Medical Center in Englewood as a Nurse Aid. Annie was then selected to attend training for the position of Ward Clerk. She became one of first, if not the first, Ward Clerks at Swedish, and over several years she trained others for that position. She substantially wrote/compiled the job manual for that position at the hospital. She was a trailblazer in that endeavor. Finally, Annie was promoted to the position of Nurse Coordinator in the Head Nurse administrative office and worked in that job until her retirement.

Wherever the family lived, Annie and Robert were devoted members of the Presbyterian Church; in Kalispell, Wickenburg, and Englewood. Over the years in different locations they served the church as choir members, deacons, and group organizers/leaders. They gave generously to the church. They are deeply devoted to their Christian faith. When near death Annie expressed her joy to go see the Lord.

In the year 2000, Annie and Robert left Colorado and moved to their house located on Bitterroot Lake in Marion, Montana. The lake property was bequeathed to Robert by his half-brother Merritt W. Jackson. Annie and Robert spent 14 happy years at the lake and commuted to church in Kalispell. They performed volunteer work at the Flathead Food Bank, they helped organize a community Thanksgiving dinner at the Marion Firehouse, and they engaged in other community activities. They made many good friends at the lake and in Kalispell, and they cherished those friendships. Thank you all for being a part of her life!

When the severe nature of Annie’s stroke became known, her devoted daughter Ruth and son Steven flew from the Denver area, along with granddaughters Chantel and Tiffany, to be with her at the end. Those loving family members sat vigil and prayed by her bedside to keep her company in her final hours. The family also took her husband Robert to visit Annie in her hospice room during one of her final lucid moments. Annie and Robert cried and held each other.

A private prayer gathering was held with Robert by family members at the St. Joseph Assisted Living facility in Polson. A larger remembrance gathering may be scheduled later, probably at the family property on Bitterroot Lake in Montana, pandemic permitting. Annie’s remains were taken to The Lakes Funeral Home in Polson, Montana, for cremation. A headstone will be placed in the Jocko Church Cemetery near where her parents, one sister, and a niece are interred. Please don’t send flowers as there won’t be a formal funeral or Celebration of Life at this time. Donations in Annie’s memory can be made to the Flathead Food Bank. Annie’s family would like to express their appreciation to the CSK Tribes for the health, burial, allotment and other benefits provided to her over the years.