To share your memory on the wall of Daniel Godwin, sign in using one of the following options:

Print
Daniel M. Godwin passed away on March 7, 2019, at the age of 68. Daniel worked as a truck driver for most of his life. Daniel moved to Lake County in the mid-90s, making the Mission Valley his home until his death.

Daniel met Donna Pena ... Read More
Daniel M. Godwin passed away on March 7, 2019, at the age of 68. Daniel worked as a truck driver for most of his life. Daniel moved to Lake County in the mid-90s, making the Mission Valley his home until his death.

Daniel met Donna Pena in 2012, and they were married on April 15, 2013. Daniel enjoyed collecting toys, amassing an impressive compilation of toys dating from 1950 to present. He was lovingly known as “Toy Man.”

Daniel is survived by his wife, Donna; his children, Daniel H. (Danielle), and Narrissa Tucker (Warren); and his grandchildren, Azariah, Kaius, Reanna, and Norah.

A vigil will be held Sunday, March 24, 2019 at 1 p.m. at Ronan Tribal Senior Center. A potluck will follow; feel free to bring a dish to share, Daniel loved variety.
Read Less

To send flowers to the family or plant a tree in memory of Daniel Mitchell Godwin, please visit our Heartfelt Sympathies Store.

Posted Mar 23, 2019 at 03:50pm
Donna and all of Daniels family, I am so sorry to hear of his passing. He was a very nice man with a great personality! I am sure he will be missed by family and friends. I was a neighbor of Daniels when he lived at Sunny Slope apartments.
Hazel Lenoir
Comment Share
Share via: 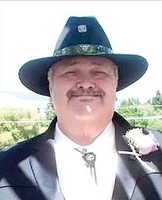