To share your memory on the wall of Daniel Phipps, sign in using one of the following options:

A classic “anchor clanker,” Daniel was the Port Captain of the Alameda Yacht Club, First Mate on the famous San Francisco yacht Linnmar, owner of the Chriscraft trawler Classy One and the sailboat New Venture. He was skipper of the 1936 schooner Landfall in the Master Mariners’ Race in San Francisco Bay, 2002. For two years he was co-captain of the Flathead Lake Shadow tour boat. Most recently he was skipper of the Montana Sapphire, Hans Christian cutter sloop, at Anacortes, LaConner and Bainbridge Island, Washington. He loved to tell the story of getting “in Dutch” for buzzing his high school football game in his father’s plane, and for being grounded in the Montana Sapphire on an uncharted reef off Victoria British Columbia, and rescued by the Canadian Coast Guard. He was once asked to leave the tony St. Francis Yacht Club in San Francisco due to dress code, until they realized he had just won their yacht race.

He was a proud “Laird of Glencoe,” owner of one-square-foot of the Auld Soil in Scotland, gifted to him by his brother Ronnie, a fundraiser to keep the landowners in their home. Captain Dan and First Mate Mary Sale traveled the world over together, as much as possible on boats.

Dan won a scholarship to study at the Frank Lloyd Wright School of Architecture in Arizona, and a national award for advance food service design. He helped to design and install food service in the Trans Am building, the French Laundry, Lucas Studios, and myriad other restaurants, casinos, prisons, schools and corporation offices. He served on the Architecture Review Board for the Victorian Design of the Capitol Building, and the restoration of Old Sacramento.

Yet, at his high school reunion he declared that his highest accomplishment was his granddaughter Rachel, who recently presented him with a great-granddaughter, Harper. Harper visited him twice in his last few months. Family was all to Daniel; he quoted Ralph Waldo Emerson: “‘Success is to laugh often and much, to appreciate beauty, to find the best in others, respect intelligence, the affection of children, to leave the world a bit better …”

Daniel made tall, frothy virgin cocktails for Mary’s mother, Ruth Sale, in her last years, and sat and watched the Flathead Lake sunset with her. He cooked savory meals for us all as a gesture of pure love, and always kept the bird feeder full.

Retired due to poor health from heart disease, Dan became a fine knife-smith, toy maker, and loom builder. A fixture at the Friday Farmers Market in Polson for years, he entertained all with his jokes and stories. He gave tiny wooden bees and dragonflies away to all the children and gave a dollar of every sale to the food bank. Daniel would be pleased to have any memorials sent to a food bank.

His wish is that his ashes be scattered from a boat outside of the Golden Gate Bridge to join those of his late wife and mother of his children, Linda, to the tune of “Farewell to the Seafaring Man.” Cremation was by Lake Funeral Home in Polson.

He is survived by long-time companion, Mary Sale of Polson; his brother, Ron (Alea) of Coursegold, California; his cousin Joel, and his siblings of Sacramento; his son, Robert (Fay) of Surprise, Arizona; and his daughter, Barbara (Travis) of Fremont, California; his grandchildren, Rachel (Vinnie), Samantha, Brian, and great-granddaughter, Harper. He was also fond of Mary’s children, Aphia (Justin) and Jacob (Adele), and her grandchildren, Jaspin and Landin.

Daniel is surely sailing the Seven Seas, flying over the Mission Mountains, red-haired again with strong legs, dancing, coaching tennis, golfing and drinking Stoli martinis straight up with seafood. Fair winds and following seas, dear Daniel. We loved you and miss you every day.
Read Less

There are no events scheduled. You can still show your support by sending flowers directly to the family, or planting a memorial tree in memory of Daniel Keith "Dan" Phipps.
Plant a Tree

Plant a Tree in Memory of Daniel
Plant a tree 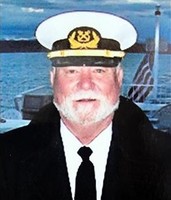