To share your memory on the wall of Delbert Malgren, sign in using one of the following options:

Del graduated from Polson High School in 1938. He attended aeronautics school in Helena and there to Seattle to work at Boeing. He enlisted in the Army Air Corps and served in Labrador during World War II. Following the War, he attended the Butte School of Mines, studying to be a mining engineer.

Del married Kathleen Hubbard in 1946, and they were married for 43 years at the time of her passing. Then Del married Elverda Hughes and she passed in 2012.

Del owned and operated Main Street Meat Market for 17 years and closed it to concentrate on raising cattle on the Pablo ranch. He retired in 1990.

Del was raised a Master Mason in 1946 and went on to York Rite, Royal Arch, Bagdad Shrine, charter member of Bagdad Legion of Honor and Royal order of Jesters. He was a representative for the Shrine Hospital in Spokane.

Del was honored to be chosen for the Honor Flight to DC in 2013, and thoroughly enjoyed the trip.

Del is survived by his son, Kenneth (Carm), and daughter Christine. He is also survived by granddaughters Heidi and Jill, and several Nephews and a Niece.

Cremation has taken place and a graveside service will be held July 25, 2019 at Lakeview Cemetery at 1:00 PM, with Military and Masonic rites.
Read Less

To send flowers to the family or plant a tree in memory of Delbert Alan "Del" Malgren, please visit our Heartfelt Sympathies Store.

Receive notifications about information and event scheduling for Delbert

We encourage you to share your most beloved memories of Delbert here, so that the family and other loved ones can always see it. You can upload cherished photographs, or share your favorite stories, and can even comment on those shared by others.

Posted Jul 18, 2019 at 01:51pm
Chris, Please accept our most heartfelt sympathies for your loss... Our thoughts are with you and your family during this difficult time.

Posted Jul 13, 2019 at 11:04am
DEAR CHRIS,
WE ARE PRAYING FOR YOU AND FOR DEL...HE WAS AN AMAZING MAN. WHEN WE CAME TO POLSON AND BOB BEGAN HIS NEW
JOURNEY AT THE PINES, DELBERT CHEERED ALL OF US MANY TIMES WITH HIS MILITARY AND LIFE STORIES. HE WAS ONE OF A
KIND. HE ALWAYS HAD A GOOD WORD AND SMILE.
GOD BLESS YOU,
JACKIE AND MARISA DI GIALLONARDO
Comment Share
Share via: 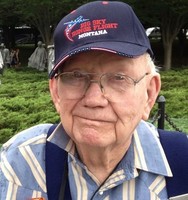