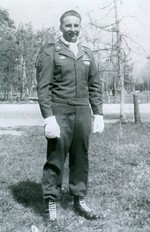 Life-long Lake County resident, Edward Oren Seifert, 98, passed away at Polson Health and Rehab Center on Sunday, October 25, 2020. He was born to Maria Jev Able Rein and William Fredrich Seifert in the Reservoir Valley area, west of Pablo on April 14, 1922. He was the eleventh of twelve children born to Maria (Mary).

Eddie went to school in Polson, and by the time he was a senior he was a strapping six-foot-one farm boy that was captain of both the football team and the basketball team, and vice-president of his senior class of '42. He received a sports scholarship to MSU, but he and his best friend wanted to do something "easier" than college, so Ed joined the Army and his friend joined the Navy! Ed became a part of the 101st Airborne Division, and as staff sergeant jumped into Normandy on June 6th, 1944, and into Nazi-occupied Holland in September. He shivered and frostbit his feet with the rest of the 101st Airborne in Bastogne during the Battle of the Bulge, before being rescued by Gen. George Patton.

He returned home to Polson in 1946 and bought a ranch with help from the GI Bill.

Eddie married Ruth Elizabeth Westfall April 16th, 1948. Most of Ed's life was spent on the ranch in the Valley View area south of Polson, except for the time he spent working at the Polson Plywood Mill. He worked just long enough to receive a pension of $35 a month! Ed was an excellent dancer and he and Ruth would attend all the dances they could in the 53 years they were together, until Ruth's death in 2001. Ed continued his dancing with the Senior Citizens and being outnumbered by the women, they would wait their turn in line to dance with him!

He was proud of his cooking and loved to bake cookies to serve to whomever stopped by...mostly his neighbor Jim Bailey, that stopped by often to check on Ed.

He was one of several veterans that were honored at the "Send Off Gala" fundraiser for Miss Montana, the DC-3/C-47 that was joining the United States' Squadron to commemorate the 75th anniversary of D-Day in Normandy. He was one of only a few WWll veterans left to tell their stories. He lived the last few years of his life in a wheelchair because of his bad knees, possibly from all the jumping out of airplanes and off training towers in his youth. But he was forever an optimist...he said his knees might get better so he could walk again and move back home, and possibly do one more jump out of an airplane!

Ed was a life member of the Elks Club and the VFW.

A celebration of life will be held in the spring.