To share your memory on the wall of Freddie Sego, sign in using one of the following options:

Print
Freddie Lee Sego, 86, born Nov. 9, 1933, in Alamosa, Colorado to Benjamin Frederick and Edna Mae Sego, passed away peacefully Thursday, June 11, 2020 at home in Kalispell with his wife and loving family at his side.

Growing up in the foo... Read More
Freddie Lee Sego, 86, born Nov. 9, 1933, in Alamosa, Colorado to Benjamin Frederick and Edna Mae Sego, passed away peacefully Thursday, June 11, 2020 at home in Kalispell with his wife and loving family at his side.

Growing up in the foothills of Colorado, Montana, and Washington, Fred developed an incurable fascination for the outdoors. As a precocious boy and well into his teens, he enjoyed disappearing for several days at a time on wild misadventures while living off the land hunting, fishing, and communing with nature.

After high school Fred accepted an engineering apprenticeship at the Puget Sound Naval Shipyard in Bremerton, Washington where he would continue his engineering career of 37 years until his retirement in 1989. During this time Fred made great impacts on the naval forces being constructed and revitalized in the Bremerton shipyard as well as Subic Bay shipyard during the wartime effort.

Fred fulfilled his patriotic duty with dedicated service enlisting in the Washington National Guard in 1953, accepting a nomination to Officer Candidate School by Washington governor Roselinni, graduating top of his class in 1962, rising to the rank of Army Captain in the Infantry prior to his honorable discharge in 1969.

While visiting family back in Okanogan, Washington in 1952, his sister Sally introduced Fred to her beautiful friend, Beverley Slater, and the connection was written in the stars. After a 9-month courtship they were married in 1953 and set out to forge a life together. They made the PNW Peninsula their family home raising their 4 children in Bremerton 1953-1957, Port Orchard 1957-1966, with a 4-year adventure in scenic Subic Bay Philippines during the Vietnam War between 1966-70, then back to Port Orchard 1970-1972, finally settling down in Silverdale from 1972-1989.

Fred and Beverly shared the love of the outdoors and respect for nature with their children and grandchildren in their care whenever possible. Be it trips to the golf course, weekend backpacking expeditions, family ski trips, weekly runs or stream fishing fun, they gave their love without expectations or conditions. The legacy of family, love and respect will live on in the 4 children, 11 grandchildren, 14 great grandchildren and many generations to come.

With retirement in 1989, they slowed down in Polson, Montana to continue their adventures sharing the mutual joy of golfing, hiking, skiing, stream fishing, camping and dancing.

As time passed, they found that the love of dancing competitions, and eventually instructing others had filled the loss of the more physical activities. They touched and inspired the lives of so many in their community that shared their love of dance and music.

In addition to being a dedicated husband and father, taking great pride in his children, Fred was honored at the opportunity to enrich the lives of his grandchildren as a provider, mentor, friend or playmate.

After the loss of his loving wife, partner in crime, and best friend ‘til the end of 56 years, Beverley, to a vicious battle with Alzheimer’s in January 2009; Fred found a new dance partner to love and share life with for his remaining 10 years. He and Karen Gunderson were married in May 2010.

Fred is preceded in death by his parents Benjamin Sego, Edna Sego-Payne and Guy Payne and his wife, Beverley Sego.

A memorial service is planned for 11 a.m. Thursday, July 9, at the Polson Elks Club - 512 Main Street, with a reception to follow. Per Fred’s wishes, cremation has taken place and he will be laid to rest beside Beverley after the ceremony.
Read Less

To send flowers to the family or plant a tree in memory of Freddie Lee Sego, please visit our Heartfelt Sympathies Store.

Receive notifications about information and event scheduling for Freddie

We encourage you to share your most beloved memories of Freddie here, so that the family and other loved ones can always see it. You can upload cherished photographs, or share your favorite stories, and can even comment on those shared by others. 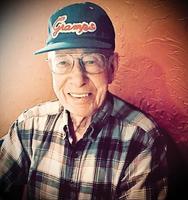