To share your memory on the wall of George Mahoney, sign in using one of the following options:

Provide comfort for the family of George Mahoney with a meaningful gesture of sympathy.

Print
George Robert Mahoney died August 2, 2019 at Kalispell Regional Hospital after a long brave battle with cancer. He passed from the loving hands of his wife into the hands of our Savior.

George was born June 27th 1952 in Wilmington, Delaw... Read More
George Robert Mahoney died August 2, 2019 at Kalispell Regional Hospital after a long brave battle with cancer. He passed from the loving hands of his wife into the hands of our Savior.

George was born June 27th 1952 in Wilmington, Delaware to John & Violette Mahoney. His father worked as a personnel officer for the Veterans Administration Hospitals and Centers. Therefore, the family lived all over the United States.

George loved spending time with his aunts at the beach. His Uncle Eddie instilled him with his love for golf at the age of 12. He spent most of his summers playing and serving as his uncle's caddie.

George graduated from Helena High School in 1970, where he made many wonderful friendships. In 1974 he graduated from the University of Montana with a Bachelor’s degree in economics. He played on the university golf team. After college he worked as an assistant golf pro for the Yuma Country Club.

In 1976 George decided to move back to Missoula, Montana and began working as a non-food representative, for American Strevell. In 1977, he met and married his wife, Ramona. Both George and Ramona knew their life together was meant to be. They were married for 42 years. Three years after they married they moved to Polson and leased the Town Pump. In 1982 they built Polson Bay Grocery and later added a car wash and laundromat. George and Ramona owned Polson Bay for 35 years.

George and Ramona raised three beautiful children in Polson. In 1984 Michael was born, followed by Christopher in 1986 and Caitlin in 1990. They have fond memories of time spent with their father.

George served as a Polson city councilman, and on the golf park board. He was instrumental in building the new nine holes added to Polson Country Club in 1989. He continued his love for golf all of his life. The camaraderie with his fellow golfers was important to him. He was one of the founding members of Polson Scholarship & Education Foundation, and he was currently serving as Vice-President. The Foundation has given scholarships to Polson graduates since 2002.

George enjoyed camping with his family and friends, and as his children grew up, many summers were spent at Abbott Lake. He and Ramona developed a love for kayaking after they retired. The beach was where the family spent vacations snorkeling and fishing.

George was a wonderful compassionate man. He leaves a huge hole in the hearts of everyone that knew him.

George is preceded in death by his parents John & Violette Mahoney, and his brother John Mahoney .

He is survived by his wife Ramona. His children Michael (Granddaughter Keira), Christopher(wife Laura & Baby Mahoney to be delivered in Dec.) and Caitlin(husband Brian & Grandson Liam). Sisters Peggy Wohlgenant (Mike) and Maryann McDaniel and various nieces and nephews also survive.

A memorial service will be held on August 16th at Good Shepherd Lutheran Church at 1:00 p.m, with luncheon to follow.The Lake Funeral Home is caring for the family. In lieu of flowers, donations may be made to Good Shepherd Lutheran Church or Polson Scholarship & Education Foundation, Pat DeVries, Treasurer at P. O. Box 562, Polson, MT 59860.
Read Less

We encourage you to share your most beloved memories of George here, so that the family and other loved ones can always see it. You can upload cherished photographs, or share your favorite stories, and can even comment on those shared by others.

Posted Aug 12, 2019 at 02:31pm
Ramona, I am so sorry to hear of George’s passing. He was a good guy. I would like to express my deepest condolences to you and your family and all of the Mahoney's and extended family out there. I first met George in the sixth grade at Catholic School in Miles City. I know that was a few years ago. His dad worked at the VA and my mom worked at the VA, and we lived 2 blocks from each other. So we became good friends. Things I remember about a George is he was highly intelligent, had a tremendous passion for golf, obviously went on to be very accomplished at it. Both him and John playing for UM golf team back in the day, that was awesome. And he was never afraid to get out of his comfort zone and try something new, like building a store in Polson. Ramona you and George made an awesome team running Polson Bay for 35 years. Without getting too long winded , Those are the memories I have. George lead an accomplished and productive life. Take care. Tom and Rosemary Gapay.
Comment Share
Share via:
MR

Posted Aug 06, 2019 at 08:05am
Dearest Ramona and Family, George was the busiest man I knew ! When I was visiting in June, he tried to get me to work the fireworks stand, funny. When you moved to Polson, he worked hard to fit right in and you became a huge asset to the community! Polson will miss his energy. May God comfort your during this difficult time and your friends will help you carry on.
Comment Share
Share via:
GM

Well, George won't have to plow snow anymore. I will miss him. He was always a gracious customer, whether I was repairing his snowplow, repairing a broken pipe in the car wash or fixing something in the laundromat. Never a complaint on the bill and quick pay. He was also a financial friend and would usually give us a $200. gas credit card each year for fuel to run our museum vehicles. My condolences to Ramona and family.
Comment Share
Share via:

Dear Ramona and family: Ted and I are so sorry to hear of George's passing. I know my Dad and brother Rick are so sadden also. George was so good to my dad and a great friend to Rick. We always enjoyed talking with you and George and getting caught up on our children's adventures. Our thoughts are with you in this difficult time! Love to all. Ted and Marilyn Laine 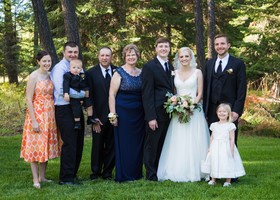