To share your memory on the wall of Iva Nelson, sign in using one of the following options:

Provide comfort for the family of Iva Nelson with a meaningful gesture of sympathy.

Iva Jean was always busy. She cared for her family, kept the books for her husband’s trucking business, and was very involved at Good Shepherd Lutheran Church. At church she taught Sunday school, led the ladies circle, and helped run Vacation Bible School. In her spare time she collected depression glass and read voraciously. But more than anything, her grandchildren and great-grandchildren were the delight of her life. She never tired of watching them play on the floor in front of her.

She was preceded in death by her parents Leon and Lilly, her son Steve, her brother Glenn Bates, and her sisters, Lafern Throndson, Wyonne Jones, Ethel Burgess, Iola Pullam, and Vivian Christonson.

The funeral service will be held at Good Shepherd Lutheran Church on July 5, 2019. Interment will take place at the Little Brown Church cemetery in Bigfork, Montana.
Read Less

We encourage you to share your most beloved memories of Iva here, so that the family and other loved ones can always see it. You can upload cherished photographs, or share your favorite stories, and can even comment on those shared by others.

John and Maryann de jager and Jessica and Danny have sent flowers to the family of Iva Jean Nelson.
Show you care by sending flowers

Posted Jul 03, 2019 at 10:29pm
With heartfelt condolences, our thoughts and prayers are with your family. Someone so special will never be forgotten.

Jessica and Danny purchased flowers for the family of Iva Nelson. Send Flowers 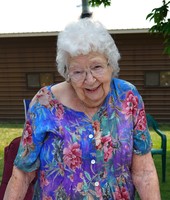