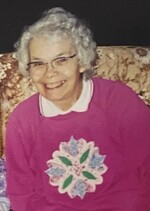 JoMay (Mellinger) Unger, age 84 passed away March 2, 2022 at Polson Health and Rehab. JoMay was born January 26, 1938 in Hamilton MT to Ted and Alice (Shields) Mellinger and joined one sister Shirley. The family moved to Deer Lodge MT in 1943 and Thompson Falls MT in 1948. She graduated from Thompson Falls High School in 1956.

As a lifelong Griz fan, she followed her dad’s footsteps and attended the University of Montana and graduated in 1960.

JoMay married Edward R Unger on November 13, 1960 in Thompson Falls MT and they had five children. They were married for 57 years. JoMay and Ed made their home on a ranch west of Pablo. She was active in the Lutheran Church, Home Demonstration Club, PTA, 4-H and a supporter of activities her kids participated in. She was known as the “Card Lady” in her later years for the many cards she made and sent.

She was preceded in death by her parents Ted and Alice Mellinger, sister Shirley Dustin, husband Edward and infant son Leonard.