To share your memory on the wall of Keith Baker, sign in using one of the following options:

Print
Keith R. Baker, 69, passed away peacefully Tuesday, February 11th, 2020, at his home. He was born in Chicago, IL in August of 1950 to Jack S. Forrester and Marie M. Zimmerman Forrester.

At the age of 17, he was appointed to the Naval Academy at Annapolis, but decided it was not for him shortly after arriving. He returned to Illinois and married Leni Ferenc in March of 1970. They had two lovely daughters, Tracy and Meghan.

Keith spent his professional life avoiding boredom, thereby holding numerous positions, in various industries, excelling at whatever he focused on. Houseparent at Mooseheart Child City (go ahead, ask one of us), creative genius behind Garlic Head Barbecue Sauce, recent best selling author of the “Longshot into the West” series, Insurance Counselor, and NRA Instructor, to name a few.

Keith had an irreverent sense of humor (except for hay snakes), and an encylopedic knowledge of the world. He believed a well-dressed man owned both dress and casual fluffy slippers. He was an expert IRISH whiskey drinker, an accomplished fly whisperer (yep, you should ask) and lifelong animal lover.

He was absolutely supportive of family; the tie that bound all of us, blood, foster, extended, and removed, together. Keith was a warm, devoted, and caring friend to so very many people, both lifelong and new. We will never be the same without him, but we will try to be as united.

Keith was preceded in death by his parents, his brothers Craig Forrester and Darrell Baker; his son-in-law Patrick Plaiss; and niece Corey Baker.

No services are planned at this time. A celebration of life will follow later this year.
Read Less

Receive notifications about information and event scheduling for Keith

There are no events scheduled. You can still show your support by sending flowers directly to the family, or planting a memorial tree in memory of Keith Richard Baker.
Plant a Tree

We encourage you to share your most beloved memories of Keith here, so that the family and other loved ones can always see it. You can upload cherished photographs, or share your favorite stories, and can even comment on those shared by others.

Posted Mar 11, 2020 at 05:35pm
Leni, I am sorry for your loss. I will miss visiting with Keith. He was always so surprised I was still fostering or how much the twins have grown. Thank you for your years of friendship and encouragement. I will miss my friend immensely. You and the family are close in my thoughts and prayers.

Posted Feb 23, 2020 at 01:05pm
We were shocked to see that Keith had passed away. We think of you all so often and we were just surfing the internet when we came across his obituary. We are so sorry to hear of this and give you all our heartfelt sympathy. He was a wonderful man and accomplished a lot in his life. God’s blessings. Ron and Marleen Schmidt.
Comment Share
Share via:
AR

Posted Feb 18, 2020 at 04:50pm
We are sorry to hear of your loss. Keith was a gem to meet and become friends with and the world will be a lessor place without him. Besides his well known humor I greatly enjoyed the times we spent discussing any number of topics as the man was a wealth of knowledge. I even got him out on a 4-wheeler ride which he had a great time. Please keep us in your thoughts and share when the celebration of his life is planned.
Andy and Jil Roberts
Comment Share
Share via:
KB

Posted Feb 13, 2020 at 12:48pm
My condolences to Leni, Tracy and their family. I will miss Keith's smiling face and wonderful sense of humor. Warm thoughts and prayers continue to be sent your way. 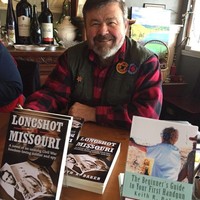