To share your memory on the wall of Llewellyn Caye, sign in using one of the following options:

Growing up he attended Elmo school, later attending Flandreau Indian Boarding school with his sister Loraine, later Monica & Wanda joined him. He enjoyed his wrestling days at school & he was a state champion. He went to Treasure Island Cooking School in California where he learned to be a chef. He worked many years in his cooking career, working for KHJC, Ronan, Mt. and Fort Simcoe in White Swan, WA. He retired from KHJC and went on to earn his CDL from SKC enabling him to drive and enjoy the United States. He always said he never seen any place more beautiful than Elmo. He would spend many summers traveling the northwest Pow Wow’s with his Willie Burger Stand. He would put youth to work cleaning around his stand, paying monetary, burgers, fries, & pop saying: “You got to work and earn the good things, nothing is free.”
He was a great story teller. He shared stories of the old timers he learned from passing on his teachings to the younger generations. He was always singing or whistling and when you asked, he would tell you the story of who and where he learned it. He told many stories of running around up in the hills, ice so thick on the lake you could drive a car across it. He told stories of traveling to Buckhorn, West Fisher, Pleasant Valley, for gathering of berries, playing stickgame into the morning with his brothers, fishing the creeks. He learned to hunt with his dad, brothers & uncles in many aboriginal areas. He worked hard all his life bucking bales, cutting Christmas trees, cutting wood. He worked for his late mother in law, Nettie Moses, as her tractor driver/ranch hand for many years. He was one of the earliest days of Chief Cliff Drum with Alec Lefthand, Doug Caye, Clifford Burke, & Antoine “Tony” Mathias. He found time in his last years to learn & expand in Ksanka language.

He met his first wife Stephanie Moses at Parker Dam Pow Wow, she followed him to California. They were married in Wapato, Washington. They made their home in California, Washington & Montana. Their children, Louis & Melinda were adapted to moving where ever his job would take him and they worked hard in the Willie Burger Stand. Willie always said they worked and Stephanie played stickgame. They enjoyed and fed many family & friends and added new friends thru out Indian country.

He was a cherished elder, teacher, traditional culturally active member to his family and his community. He will be dearly missed each and every day. He always said “Learn these songs. Chop Chop.” Lastly, always remember each & every one of you were very important to him. You made him so proud with every little accomplishment. Remember his words, teachings & that he loved you all.

To send flowers to the family or plant a tree in memory of Llewellyn "Willie" Caye, please visit our Heartfelt Sympathies Store.

Receive notifications about information and event scheduling for Llewellyn

We encourage you to share your most beloved memories of Llewellyn here, so that the family and other loved ones can always see it. You can upload cherished photographs, or share your favorite stories, and can even comment on those shared by others. 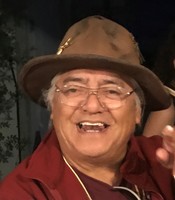