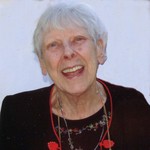 Marie came to Montana 19 years ago after Edward died to live with her daughter. It was there that she met her new grandchildren Autumn Adams (Jason), Sonna Brown (Kevin) and her great grandchildren Elliott, Payton, Josie, Josh, Cassy Jo, Angie, Annie and Ben.

A graduate of Watertown High School class of 1940, she also attended Amesbury High School in Amesbury Massachusetts where she was a majorette. Marie was a supervisor for many years at B.F. Goodrich in Watertown, Massachusetts. After her divorce from Joseph Lambert, she married the love of her life Edward Kadehjian in 1962. They had many good years together traveling to Puerto Rico, Florida, and Hawaii.
Marie was a proud member of the Abenaki Nation of Vermont and a descendent of the Bras D’Or Mi’kmaq Nation of Nova Scotia. She leaves behind many memories and her devoted and loving dog “Puppy”.

The family is grateful for the dedicated care she received from the Polson Health and Rehab nurses, CNAs, physical and recreational therapists, and staff.

Cremation has taken place and her remains have been flown to Boston where they will be interred in Mount Auburn Cemetery next to her beloved “Eddie”.