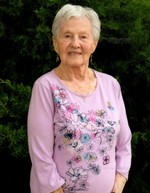 Mary Dubiak Wasylko. Mom was born on May 20, 1922 to Samuel & Eva Dubiak in Lublin, Wisconsin, and passed away September 8, 2019, age 97, in Polson where she had recently moved. She was raised on a dairy farm, and graduated from Gilman H.S. in 1941. She worked in a Defense Plant in Kearny, New Jersey in 1942, later continuing the same work in Chicago. She was dating John Wasylko when on leave from the Navy, having grown up in the same community, and they married in 1947 in the Russian Orthodox Church in Lublin. They made their home in Chicago where they raised their children- son, Wayne and daughter, Janice.

Mom was active in her church (now a member of the Lutheran church) teaching Sunday School, sang in the choir, participated in the women’s organization, and Bible studies. The family moved to Racine, Wisconsin in 1965 where John was employed as supervisor at Racine Casting Co. She enjoyed waitressing jobs in Chicago and Racine.

Throughout the earlier years, the family traveled Route 66 to California and along the southern states, a trip to Mt. Rushmore, and many places in the Midwest. In later years, she enjoyed seeing interesting places in ALL four corners of the USA, including NYC. Mom loved dancing- social, square, line, and the polka. She enjoyed bowling, embroidery, crossword and jigsaw puzzles, and playing Scrabble. She enjoyed baking fancy little cookies for family and friends, and at Easter time, making beautiful waxed-designed, color-dyed eggs, some for keeping, mostly for giving away. She had many houseplants, Christmas Cactus was the favorite, but all did well.

After John passed away (1984), she moved to Missoula in 1986 to be near her daughter and husband, Jack, who had just become new parents to Nathan, and later to Sam. She got great pleasure being with them- lots of babysitting, loving them, and being part of their lives.

Mom was an active member of Immanuel Lutheran Church, and the Missoula Senior Center (for many years). She was a charter member of the Missoula YMCA, and a die-hard Chicago Cubs fan. All her adult life she was a strong believer in volunteering, and did so for church and community every place she lived. Visiting the elderly & home-bound were important to her. Mom enjoyed her life very much, especially her close-knit family, being one of 12 siblings, who eventually were spread throughout the country. There are many nieces and nephews, and there were many family reunions and gatherings enjoyed by all. She had many dear friends far and near, still keeping in touch with some, some were now in their heavenly home in the arms of Jesus.

Mom enjoyed good health all her life and gives thanks to God for all Blessings, Always.

Preceding her in death were her parents, husband John of 35 years, son Wayne, six brothers and five sisters.