To share your memory on the wall of Orville Bjorge, sign in using one of the following options:

Anybody that knew Orville, knew he was patriotic, a proud WW2 10th Mountain Infantry Veteran, who loved God, was proud of his Norwegian heritage, and loved family. He was also known for his love of Heinz Tomato Ketchup! Something that has gone down the generations to his nephew and great nephew.

Orville attended grade school in Garcon Gulch, and after 2 weeks boarding in Polson, which he didn’t like, transferred to the then new Hot Springs high school, graduating in the second class to graduate from Hot Springs.

Orville was from Company C in the 86th Infantry Regiment, but he didn’t ski. He joined the Army in May 1944 and the 10th Mountain Division later that year at Camp Swift in Texas, where all three infantry regiments — the 85th, 86th and 87th — were sent after high-mountain training at Camp Hale, Colorado.

After joining the division at Camp Hale, he finished training in Texas and was shipped overseas to Italy, where they marched inland. He was one of the troops selected to scale the mountain, in the dead of night, to gain access to Riva Ridge and take it away from the German army. They had to make foxholes in the deep snow, because the ground was too rocky to dig foxholes.

A wounded buddy crawled into his snow cave, and Orville left his pack and blanket for him when he went out on a 9 man patrol where they were ambushed by some German soldiers, who were holding a surrender flag, until they got closer. They then began firing. Orville was one of 3 wounded. 3 others were killed in combat, and 3 were unscathed. After being found and having to spend a night in the snow, wounded, he was taken to the evacuation point on an abandoned German stretcher, and was told by the man, who found him, that he was the first soldier evacuated off Riva Ridge, using a new cable tram across the valley. You can read all about it in the Riva Ridge Operation, found on Google.

When he was discharged, he returned to Garcon Gulch, and to the family ranch and spent the rest of his life as a rancher. He loved all things agricultural and Bible verses.

Orville passed into the loving arms of Jesus on Sunday, October 11, 2020, at his home in Garcon Gulch, and he is so missed.

Orville is preceded in death by his parents, Martin and Clara Bjorge, older brother, Morris (Adell), a sister Ruth, and an infant brother, Mathias, both who died before the age of 2.

A family memorial service with military honors, and with a live stream,will be held on November 7, and a celebration of life memorial potluck is being planned for later in the spring, at Lonepine, after restrictions from Covid-19 have been lifted.

I have fought a good fight, I have finished my course, I have kept the faith:
Henceforth there is laid up for me a crown of righteousness, which the Lord, the righteous judge, shall give me at that day: and not to me only, but unto all them also that love his appearing. 2Timothy 4:7,8

Well done, thou good and faithful servant. We will miss you, Orville.

The family suggests donations in his memory, to be made to the Hot Springs Senior Center or a charity of your choice.
Read Less

To send flowers to the family or plant a tree in memory of Orville Mathias Bjorge, please visit our Heartfelt Sympathies Store.

Receive notifications about information and event scheduling for Orville

We encourage you to share your most beloved memories of Orville here, so that the family and other loved ones can always see it. You can upload cherished photographs, or share your favorite stories, and can even comment on those shared by others.

Love's Tapestry was purchased for the family of Orville Bjorge. Send Flowers

Posted Oct 14, 2020 at 03:03pm
Our community as well as our nation should honor such men as Orville. He will continue on in our memories as a unique and kind man. 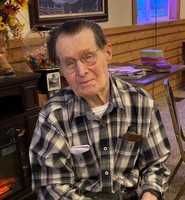