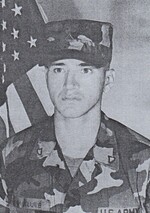 Robert John McClure, known by everyone as RJ, passed away September 24, 2020. Robert was born September 1, 1964. Robert’s education included attending Ronan High School and graduating in 1983. He then attended Salish Kootenai College from 1985 to 1987 and got an AA Degree in business. He also served in the Montana National Guard from 1987 to 1997. He attended the state of Montana E5 Basic Combat Training course in 1987 in For Sill, OK, Top Crew Live Fire in 1989 Camp WG Williams, UT, Primary Leadership Development Course and 2-163rd Calvary Battalion in 1992. He worked at Natural Resource as a Field Data Tech in the fisheries department. He also was a Health Care Worker and worked many years at the Tribal Culture Encampment. He also volunteered his time at the veterans and disabled facilities.

Robert John had many things he enjoyed doing such as: play a great game of pool with the guys, horseshoes, golf, and collecting sports cards. He loved to be in the mountains while camping, fishing, and hunting. Never the less RJ had a special spot to sit in the Pablo Bar/Tailgate to watch sports on the TV with friends. Robert had a true love Oh yes for the one and only Marilyn Monroe.

Robert John McClure, best known as RJ will be greatly missed by family and friends. “Until we see you again”.