To share your memory on the wall of Sharon Finney, sign in using one of the following options:

Sharon is survived by her husband Wayne, her daughter Shannon and her husband Todd, and her son Jay and his wife Patricia and their 2 children as well as numerous in-laws and nieces and nephews.

There are no events scheduled. You can still show your support by sending flowers directly to the family, or planting a memorial tree in memory of Sharon Lee Finney.
Plant a Tree

We encourage you to share your most beloved memories of Sharon here, so that the family and other loved ones can always see it. You can upload cherished photographs, or share your favorite stories, and can even comment on those shared by others.

Posted Nov 30, 2019 at 12:09pm
I was saddened to read about Sharon's passing. We go back many many years. I was their babysitter since Jay was a baby. Sharon and I became friends as she just lived down the street from us, and as a teen I could really talk to her. For 4 summers I went with them to Lake Mary Ronan to help with the kids, but also was allowed to have my own time and create many wonderful memories. Over the years we kept in touch through social media, but I had no idea Sharon was so sick. I want to send my condolences to all the family. I know she will be missed.
Comment Share
Share via:
BL

Posted Nov 29, 2019 at 05:41pm
Wayne and family,
My very deepest condolences to you and yours. This truly is the toughest part of life.
If I had an address, I would send a card.
I remember our family fun days at MANG. Such good years.
Roger has been gone 17 years, life is just not the same without our "soul mates".
Hugs to you all.
Bonnie L Larsen. ❤😘🇺🇸
Comment Share
Share via:
RJ

Posted Nov 29, 2019 at 10:29am
Wayne, my thoughts are with you at this time. I pray you will find solace in the time you shared with Sharon and enjoy the adventures you made.
Comment Share
Share via:
CK

Posted Nov 26, 2019 at 04:13pm
Sharon was a wonderful woman! Years ago I helped her with her and Wayne's 50th wedding anniversary invitations when working at a local print shop in town. She was so funny and kind. Sharon reminded me a lot of my grandmother, not really how she acted as much, but how she spoke. I've seen her a few times over the years while working at the credit union, as well as the Mission Valley year sales. Although, I don't think she remembered me, but she left an impression on me that will last for years. I'll be praying for her family and friends. Godspeed
Comment Share
Share via:
JS

My sincere condolences to all of you. Sharon was always such a force - I know how much you will miss her spirit and vitality. I have great memories of our friendship during the years in Great Falls, especially. Rest in peace, dear Sharon.
Comment Share
Share via: 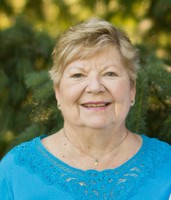