To share your memory on the wall of Trudy Evenson, sign in using one of the following options:

Provide comfort for the family of Trudy Evenson with a meaningful gesture of sympathy.

Trudy grew up and was educated in Missoula, MT. Her mother owned the Whistle Stop Drive In, a drive throug... Read More
Trudy Carol King Evenson, passed away on Tuesday, March 19, 2019. She was born on January 7, 1949 to Bud and Sis (Lucille) King.

Trudy grew up and was educated in Missoula, MT. Her mother owned the Whistle Stop Drive In, a drive through restaurant on highway 93, where Trudy frequently helped. Sis then purchased the In-Between Bar. Both Sis and Trudy were fantastic to struggling college students whom Sis frequently employed. These college students became Trudy’s lifelong “big” brothers. They rented from Sis and became Trudy’s extended family.

After graduation from Hellgate High School in 1966, Trudy obtained her R.N. and worked for O and O Associates, Missoula Opthamologists, for many years. She married John Tantlinger and together they had two beautiful children, Tonja King and Todd King.

In the early 90’s Trudy moved to Frenchtown to run the King Ranch Golf Course, a property her father Bud and son Todd developed. She met Dale Evenson and they were married in 1997. In the early 2000’s Dale and Trudy purchased a home on Flathead Lake and turned it into a Bed and Breakfast called Wildhorse Hideaway north of Elmo. Dale and Trudy loved their guests, enjoyed boating, taking numerous drives in the side by side and spending time in Hawaii.

Trudy was a woman of many talents. She enjoyed music, teaching and playing the piano, and ballet when younger. She was the state Women’s Archery Champion in 1994. She was a fantastic chef, tweaking recipes and inventing delicious breakfasts for guests.

Her artistic talent is widely known as she became an accomplished artist, creating art works using various media, including oils, acrylics, pastels, pencils, chalk and watercolors. Her art work can be found in private collections around the globe.

Trudy was a selfless person and known as a loving, caring woman who was inclusive and genuinely loved all. A loving, devoted mother and wife she was seldom seen without a smile on her face.

Steve Scoffene, Trudy’s cousin, remembered her growing up. “Trudy could do anything. She was unstoppable in anything she tried to achieve – She was like a true “princess warrior”. And her cousin Dennis Washington said, “She was very near and dear to my heart”. They remained close their entire lives. Trudy will be forever loved, missed, and cherished.

Receive notifications about information and event scheduling for Trudy

There are no events scheduled. You can still show your support by sending flowers directly to the family, or planting a memorial tree in memory of Trudy Carol Evenson (King).
Plant a Tree

We encourage you to share your most beloved memories of Trudy here, so that the family and other loved ones can always see it. You can upload cherished photographs, or share your favorite stories, and can even comment on those shared by others.

Posted Jun 27, 2019 at 11:44am
My sympathy to Dale, Tonya, and Trudy's whole extended family. My special memories of her will be her smile and her art work.

Posted Mar 22, 2019 at 06:56am
I will never forget the kindness this dear friend has given to me. Trudy and I spent many hours talking about the good times and even the bad times and working our way through times that seemed impossible. I love her like a sister and I know she felt that way about me too. I am going to miss our times together, but I know that she is watching and taking care of me from above, as I have the best angel a girl could ever have. You may be gone my Trudy, but you will never be forgotten and in my heart forever. Love you!
Vicki Houk
Comment Share
Share via:
LP

Larry Petty I had the opportunity to meet Trudy 5 years ago.That was something very special. It didn't take long to realize she was such a giving and kind person. I loved her like a 2nd sister. She will be greatly missed, but not forgotten.
TK

Posted Mar 19, 2019 at 01:47pm
My sincere condolences on the loss of your dear loved one. May it comfort you to know that our Loving Creator promises to bring back to life those in his memory to perfect health on a paradise "earth" (Acts 24:15, Revelation 21:4). 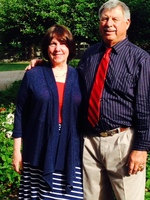